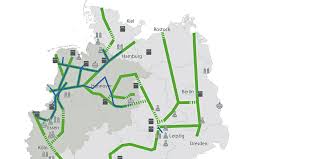 German gas pipeline operators have presented a plan to create a 1,200-kilometre grid by 2030 to transport hydrogen across the country, which would be the world’s largest being planned so far.

“The H2 Startnetz 2030 with a length of more than 1,200 kilometres is the first step to turn the vision to of a national hydrogen grid into a reality,” FNB Gas managing director Inga Posch said.

“A completely new energy grid would emerge in Germany on the basis of the existing gas grid, which gives industry sectors such as steel or chemicals the possibility to become climate neutral.”

But in general, the association considers as green gases both green hydrogen, and blue hydrogen, which is produced from natural gas and linked to carbon capture and storage (CCS).

“As regulated grid operator, we provide our infrastructure without discrimination for the transport of hydrogen independent of its production method (thus technology neutral),” Fischer said.

About 1,100 out of the 1,200 kilometres of the grid planned would be converted former gas pipelines, while some 100 kms wold need to be built anew, FNB Gas said.

The association of Germany’s gas grid operators earlier this year had already presented a map of a theoretical 5,900km hydrogen grid that would be based to 90% on the existing natural gas pipeline network, with links to the neighbouring Netherlands, which already has a national hydrogen strategy and several projects in its early days to produce green hydrogen from offshore wind.

The highly industrialised state of North-Rhine-Westphalia (NRW), and the Netherlands, also have started off a joint research initiative into the creation of transnational value chains for green hydrogen that would range from the Dutch North Sea to NRW.

FNB Gas said its planning for H2 Startnetz was done in parallel to the latest update to Germany’s official 2020-2030 network development plan (NEP) for gas.

Germany’s government is slated to present a national hydrogen strategy in coming weeks that was delayed due to the Covid-19 outbreak.